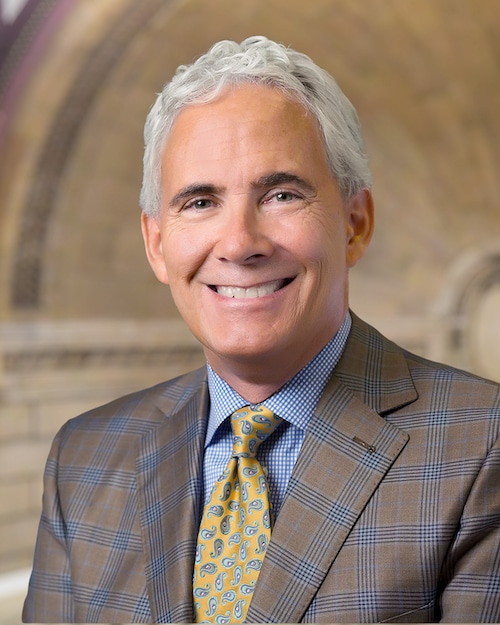 Patrick J. Perotti is nationally recognized for outstanding achievements in consumer class actions and employment discrimination. His verdicts and settlements exceed $1 billion dollars.  Expanding on this success, he is the architect of the firm’s Ohio Lawyers Give Back initiative to distribute unclaimed class action funds to charities, which has directed more than $50 million dollars to charities and not-for-profits.

Mr. Perotti is regularly selected to lead class suits in Ohio and around the country. His reputation developed from his outcomes to not only offer compensation to class members, but also stop unlawful government and corporate practices. Class actions are not simply to return $65 to a defrauded consumer.  They equally disgorge ill-gotten gains from companies and government, to deter misconduct in the future.  When you don’t make money overcharging your customers, and instead it costs you money, you don’t repeat the wrongdoing.  Patrick’s cases are in larger industries: banking; insurance; telecommunications; real estate; aviation and travel; consumer products; etc.  Those companies watch their competitors.  When Mr. Perotti succeeds against one member of an industry, the rest of the industry suddenly stops engaging in the challenged practice (“he’s going to sue us next.)  This has resulted in industry-wide change in banking, real estate, consumer retail, etc.  Ending practices that harm millions of consumers.  That is why the defense bar, and groups like the Chamber of Commerce, have labeled Patrick as one of the 50 most feared Plaintiff class actions lawyers in the United States.

Likewise, the bench, bar and community have recognized Mr. Perotti’s legal and community accomplishments with the National Trial Lawyers Top 100 Award, the defense bar’s Top 75 Plaintiff Trial Lawyers in the United States, the Ohio State Bar Association’s highest honor, the Ritter Award, and his alma mater Marshall College of Law’s highest honor, the Alumnae of the Year Award. As a frequent lecturer at state and national conferences on class actions, employment law, and the cy pres doctrine, Patrick is regularly consulted by the bench, bar and media on those subjects. His interviews and commentary are found in countless websites, newspapers, and local and national radio and television shows.

Mr. Perotti is most proud of his reputation of extreme fairness, impartiality and professionalism in working with opposing counsel, co-counsel, and the court. Always working based on the simple motto, “Do the right thing,” his work as class counsel is consistently described by courts as “exceptional representation”: “Exceptional representation for the class members. Taking into consideration the complexity of the legal issues at hand and the result achieved by Class Counsel, it is clear to the Court that the legal representation in this case was superb.”

In addition to Class Action for consumers, his practice for the last 40 years includes the full range of workers’ rights and Civil Rights, including Wrongful Discharge; Employment Discrimination involving Age, Sex, Race, Nationality, Color, Handicap and Religion; Sexual and Other Harassment; Equal Pay Act claims; Americans with Disabilities Act claims; and Family and Medical Leave Act claims. Mr. Perotti is a Certified Specialist in Labor and Employment, a designation achieved by less than 1% of attorneys in his field in Ohio.

WAGE AND HOUR AND COLLECTIVE ACTIONS

Finally, Mr. Perotti’s employment work has been highly successful across the United States in the specialized area of state and national wage and hour (class) collective actions. His suits challenge the failure of large employers to pay overtime and other wages required by state and federal laws.

As Close As Possible: The Cy Pres Doctrine in the Class Action Context

Good, Bad, But Not Indifferent – The Beginning of Class Actions

Patrick is the founder of the firm’s Ohio Lawyers Give Back initiative. In recent years, he has advocated for the use of a doctrine called cy pres which allows for unclaimed class action funds to be distributed to charities. Because of his unique efforts, he has directed over $50 million dollars to over 300 charities and non-profits. Further information can be found at www.ohiolawyersgiveback.org.

When he is not working, Patrick loves spending time with his wife, adult children, and grandchildren.  He loves traveling to nature-friendly countries and destinations.  Other passions are skiing, biking, roller skating, karaoke, playing boogie-woogie piano, and plain, old gardening!